All Promises | Jobs and the Economy

When the NDP came into power, they promised a 20 per cent tax hike on job creators would bring in massive amounts of new revenues. They promised Albertans it would solve our budget shortfalls.

By $8.4 billion over their four years in power.

Instead of bringing in more revenue, the NDP tax hike made a difficult economic situation even worse for Albertans. 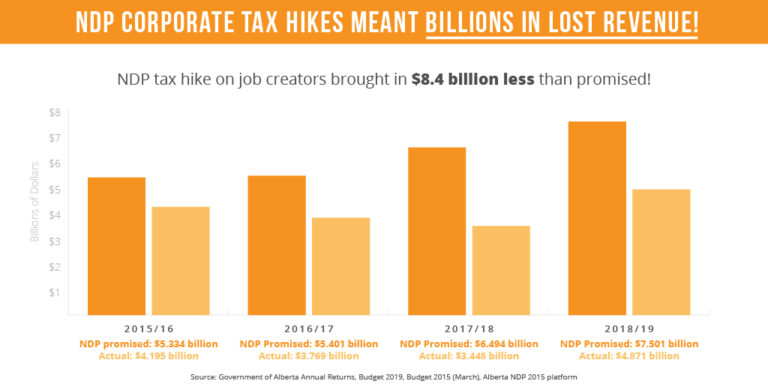 Not only that, NDP tax hikes wiped away the Alberta Advantage. When they were elected, Alberta had the most competitive tax rates for job creators. Combined with tax cuts from the U.S. government, we became less competitive than several Canadian provinces and U.S. states.

The Job Creation Tax Cut was a major piece of that promise.

Unlike the NDP’s plan, its aim is to drive investment into the province, and therefore drive up revenues over the longterm by creating a larger tax base.

Two weeks ago, the Job Creation Tax Cut made headlines, and today, it formally gets introduced as Bill 3.

Let's make our province a magnet for investment and get Alberta back to work! #ableg pic.twitter.com/AM02pJyY91

Shortly after we were elected, we kept our promise to Albertans to reduce taxes on our job creators from 12 per cent to 8 per cent over a four year period.

We were elected to deliver on 375 positive commitments we made to Albertans in our platform.

We've already delivered on 55 of them, and we're just getting started.